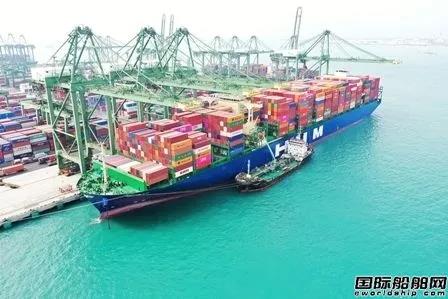 HMM Nuri, the first of a series of eight 16,000-TEU container vessels of HMM (formerly Hyundai Merchant Marine), started its maiden voyage with a full load.

On April 6th, "HMM Nuri" left Singapore Port with a full cargo volume of 13438 TEUs, and will pass through the Suez Canal to the port of Rotterdam, the Netherlands. According to HMM, considering the safety of ship operation and cargo weight, the maximum capacity of each 16,000-TEU container ship is about 13300 TEUs on average.

"HMM Nuri" is the first of eight 16,000-TEU container ships built by Hyundai Heavy Industries for HMM, which was delivered in March this year. The following “HMMGaon” was also delivered to HMM in March and is currently on its way to Yantian Port. Another 6 new vessels will also be delivered in the first half of this year.

Based on the design philosophy of "LNG reservation", these ships are equipped with open-loop desulfurization device and adopts selective catalytic reduction technology, which can reduce the emission of nitrogen oxides by more than 80% compared with the industry average. In addition, new ships also improve the energy efficiency, reducing the carbon footprint by 52% compared with the previous generation ship. The ship's lashing bridge is designed as a windproof structure to ensure reliable protection of containers in strong winds and to improve operational safety.

It is learned that these vessels are parts of up to 20 VLCSs ordered by HMM in three major shipbuilding companies in Korea in 2018. Among them, 12 24,000-TEU container ships built in Daewoo Shipbuilding and Samsung Heavy Industries were all delivered last year and put into Asian and European routes.

It is worth mentioning that since April last year, HMM's 12 24,000-TEU container vessels have completed 37 voyages, 36 of which were fully loaded.

With the addition of eight 16,000-TEU container ships built by Hyundai Heavy Industries, the fleet capacity of HMM container ships will be expanded to 900,000 TEUs after delivery, which will form a cost structure with lower fixed costs and higher operating efficiency. HMM aims to expand the fleet size to 1 million TEUs by 2022, which is the total capacity of HMM and Hanjin Shipping in 2016.

RELATED NEWS
China's ...
On the morning of may 15, China's first autonomous container merchant ship,
Overseas...
On August 15, Splash 247 reported that the application deadline for The Captain’s Table closed in early August with organisers of ...
CALLING ...
The Captain’s Table is a global start-up competition launched by YPSN (HK) Ltd to connect innovators and startup entrepreneurs wit...
[E-PORTS...
Huang Guansheng, director of the State Port Administration Office, said on July 3 that the port fee reduction work had achieved po...
Overseas...
China's State Council announced six new provincial pilot free trade zones in Shandong, Jiangsu, Guangxi, Hebei, Yunnan and Heilong...
China Co...
According to the weekly export report released by USDA, Chinese buyers ordered 760,527 tons of soybeans from US in the week ending...
"Made in...
On the morning of December 8, "Han Hai 5 Hao", a demonstration container ship built by Hubei province, was launched and successful...
[E-PORTS...
There's only three months left before the implementation of IMO 2020 Sulfur Cap. Everyone is most concerned about the cost on usin...
Overseas...
On August 12, Splash 247 reported that Evergreen has told clients that any omission, concealment or misdeclaration of hazardous ca...
Overseas...
China would allow the import of soymeal livestock feed from Argentina for the first time under a deal announced by Buenos Aires on...
Useful Links
BIMCONMC (Sea Weather)IntercargoMSAIntertankoCNSS (TIDE)Paris MemorandumTokyo MemorandumInternational Maritime Organisation (IMO)International Association of Classification Societies
Quick Links
Shipping Agency DeskNewsAbout E-PORTS
400-920-8810
contact@e-ports.com